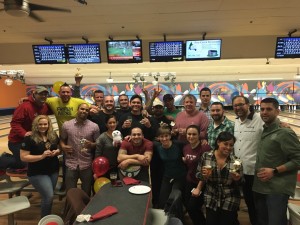 A big thank you to all who participated in the 3rd Annual ETTER Bowling Challenge last evening.

It was a fun, spirited and enthusiastic group that took to the lanes for some friendly competition and good old fashioned trash talking!

Congratulations to our First Place team – Captain Laldeo Lilman and the Blind Bowlers!!

Led by Dave “Strike Force” Lusitani, the team of Laldeo, Dave L, Tom, Andre and Claus put together two impressive games to win the challenge by 97 pins over our Second Place team, Livin’ on a Spare.

Here are the final standings;

Here are the teams;

Paul bowled a 230 game to take high game, with a six-pack (six strikes in a row) – all because his team told him to throw strikes!

Dave L. bowled a 216 game to take second high game.  Awesome, Dave L. – Luis and Ryan Smart are still not happy.  Rumor has it that Dave is offering bowling lessons…

Kristen bowled a 36 game to take low score game, but she looked good!

Norm won the unofficial hardest throw in a close competition with Alex.  Speeds upwards of 23 -25 mph were reported.  No pins were harmed in the process that we know of…..

A great time was had by all participants!